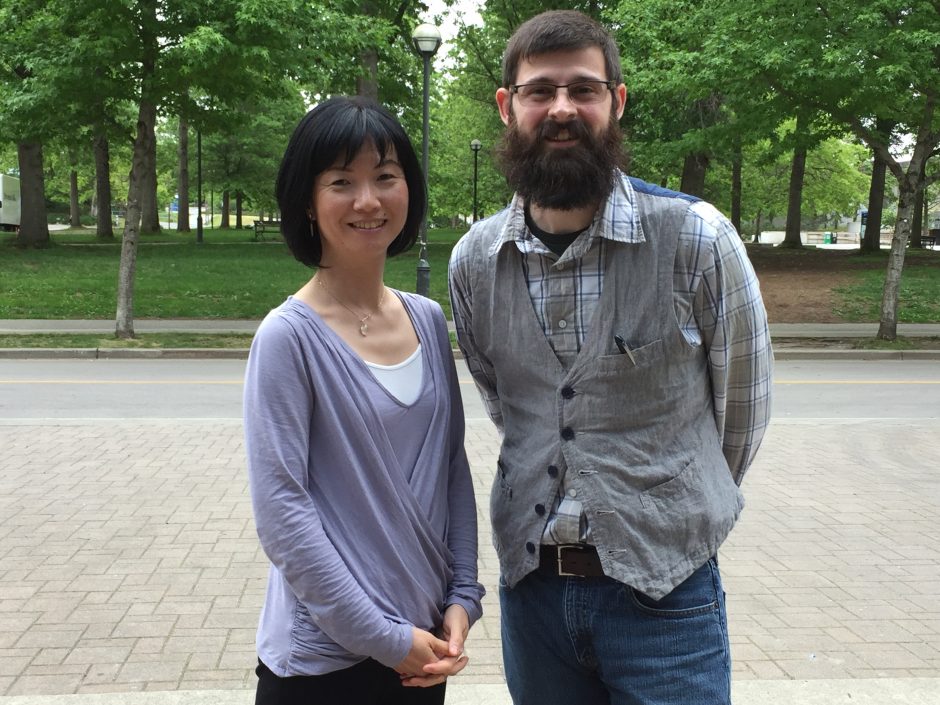 We are pleased to announce that Time and Place at UBC: Our Histories and Relations has received a TLEF (Teaching and Learning Enhancement Fund) project grant. The grant will enable the project to enter an exciting and meaningful phase of development with the creation of a new timeline row that presents the history of the Musqueam Nation, including the community’s relationship with UBC.

Hanae Tsukada, the original developer of the resource, will be working jointly with Musqueam Senior Archivist Jason Woolman as co-Project Managers for the TLEF project, which is a collaboration between UBC and Musqueam. Hanae (HT) was interviewed by CTLT’s Emi Sasagawa for an article highlighting four successfully funded TLEF projects. Below is a transcript of Hanae’s interview (from “TLEF projects innovate to enrich student learning,” by Emi Sasagawa).

Title: Developing a UBC-Aboriginal Timeline with Musqueam content – Time and Place at UBC: Our Histories and Relations 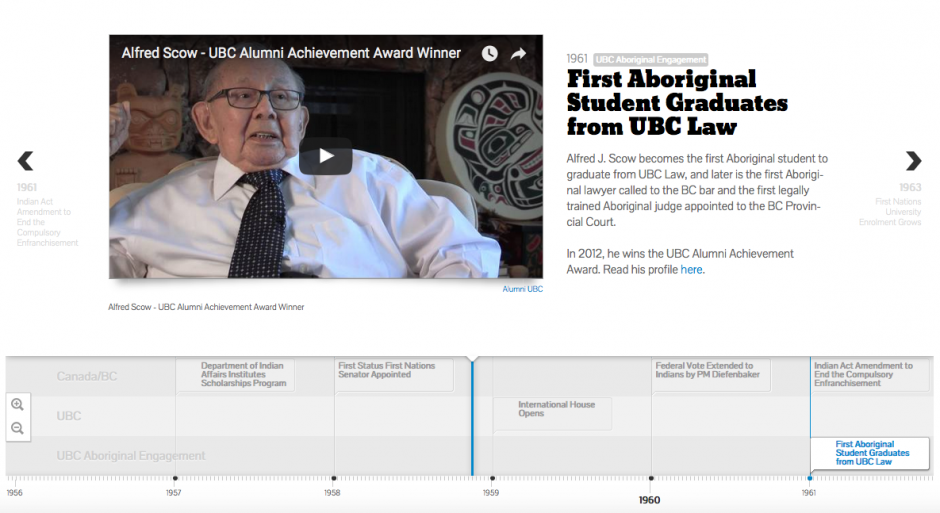 A screenshot from Time and Place at UBC; 1961 – Alfred J. Scow is the first Aboriginal student to graduate from UBC Law

A centrepiece of an online educational resource, Time and Place at UBC: Our Histories and Relations, is a timeline, which presents major historical events of UBC and its relationship with Aboriginal peoples against the backdrop of the broader society in BC and Canada. This TLEF project creates a new timeline row that presents the history of the Musqueam Nation, including the community’s relationship with UBC.

How did the idea for this project emerge?

HT: The timeline had been public since 2013, around the time of the West Coast National Event of the Truth and Reconciliation Commission. When I went to c̓əsnaʔəm, the City Before the City exhibit at the Museum of Vancouver in January 2015, it became really clear that my timeline didn’t have a direct connection to specific events from Musqueam. I started wanting to explore the possibility of having this history and relationship represented in the timeline. In June 2015, I had the opportunity to show the timeline to Jason Woolman (Senior Archivist) and Larissa Grant (Referrals, Research and Engagement) from the Treaty, Lands, and Resources Department of the Musqueam Indian Band. I was pleased to learn that they were willing to collaborate in adding Musqueam history and current events to the timeline. I created a formal proposal that was presented to the Musqueam Advisory Committee for the First Nations and Indigenous Studies program and CTLT Aboriginal Initiatives. Jason and the Musqueam-UBC liaison, Leona Sparrow, are part of the Committee, and they provided a lot of valuable insight from the Musqueam community for the development of the TLEF project proposal. Daniel Justice is also part of the Committee, and that’s how he became involved. I am also grateful to Amy Perreault, CTLT Aboriginal Initiatives Strategist, who supported the process from the beginning.

How will this project help enrich student learning? How will it impact teaching?

HT: In terms of teaching and learning, we may know, or at least have heard, that UBC stands on the traditional, ancestral, and unceded territories of the Musqueam peoples, but I think teaching what that means and how we at UBC – both as individuals and as an institution – have gotten to where we are today physically and socially can be a challenging task. So I wanted to create a resource that visually represents the long and continuous Musqueam presence on this land dating back prior to the “arrival” of UBC. By locating Musqueam history in parallel to UBC’s institutional history, and against the backdrop of the histories of BC and Canada in the timeline, I want students to think of Musqueam history, or more broadly colonialism in Canada, in present tense and in a localized way, rather than thinking of it as an abstract thing of the past or something that is irrelevant to them. We will create an educator guide that suggests ways to respectfully engage with and utilize the newly developed timeline in various teaching and learning settings.

Another thing I am hoping to do with this project, I am going to hire a student, ideally of Musqueam descent, to conduct archival research on Musqueam history under the guidance of Jason Woolman. In the Time and Place at UBC website, I share my learning experiences through developing the timeline, and I heard that my stories helped some students engage with learning about UBC’s history and relationship with Aboriginal peoples because they could relate to me. Similarly, I want the student we hire for this project to reflect on what they learn. Different voices speak to different people so I hope that the student’s story will create another entry point for more students’ learning.

What are your main goals with this project?

HT: The most important goal would be to create a mutually meaningful space for dialogue between the Musqueam community and UBC through consulting and collaborating with the community in every aspect of the development and implementation of this resource. Currently, the timeline consists of three rows: “Canada/BC,” “UBC,” and “UBC Aboriginal Engagement.” I want to have a Musqueam row at the top as a way to acknowledge its significance and to intentionally have us think about how it is related to all of the other rows. I hope that the Musqueam row serves as a space where Musqueam peoples share their history with educators, students, and others at UBC from their perspectives, rather than UBC speaking for them. I don’t really know how the end product of this project will exactly look like because I don’t know what will unfold from looking into Musqueam history, but that makes the project all the more exciting.