Time and Place at UBC: Our Histories and Relations
» Home » Developer’s Stories » Story 1 – It’s “their” history, isn’t it?

This story discusses how, as an international student from Japan, my view of Canadian history as “their” history transformed into an interest in tracing UBC’s institutional history and relationship with Aboriginal peoples against the backdrop of the broader federal and provincial histories in Canada. 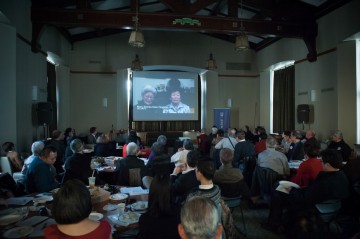 The Addressing Injustice symposium in March 2012. Photo by Don Erhardt.

I am not from Canada. Neither am I a historian nor an Indigenous Studies scholar. I was born and raised in Niigata, Japan. I came to Canada in 2007 via the United States for my doctoral studies in Educational Studies at UBC. As it may be the case for many newcomers to Canada, I came with very little knowledge about Canadian history and politics. A question like “Whose land am I entering?” did not cross my mind at all. I thought I had just moved from Minneapolis to Vancouver.

After my arrival in Vancouver, I encountered occasional opportunities to learn about Canada’s history with Aboriginal peoples. However, those occasions occurred fairly randomly, such as someone mentioning Indian Residential Schools in a class discussion, at a campus event, or on the radio. I did not know how to pull all the pieces of information together in my head, and, at the end of the day, it was “their” history to me. I compared my partial understanding of Canada’s history with what I knew of Japan’s history: Japan has many unresolved historical issues, and so does Canada. I did not think much further than this.

A turning point came in March 2012 when I attended the on-campus symposium, Addressing Injustice: UBC’s Response to the Internment of Japanese Canadians Students. This event took place to mark UBC’s decision to grant honorary degrees to seventy-six Japanese Canadian students who were forced to leave UBC for internment camps in 1942 and could not complete their degrees. As a Japanese person whose area of research is higher education, I was particularly interested in UBC’s action of removing Japanese Canadian students from the university[1] and its direct and significant impact on those seventy-six students’ lives. I felt unsettled. There I was in 2012, witnessing the university finally acknowledging its culpability in enacting an institutional injustice that targeted “people like me”[2] seventy years ago, and learning that it took three years for an individual, Mary Kitagawa, to convince UBC to grant honorary degrees to the affected students.[3] I felt that this historical trajectory of UBC, and more broadly of Canada, gave me a new, and compelling, explanation for where my current experience at UBC as a Japanese student came from. For the first time, I saw myself in Canada’s historical continuum: it was as if I had learned something about my family’s past that had been hidden from me that suddenly shifted how I saw and related to this history. My view of Canadian history as “their” history slowly started to shift. 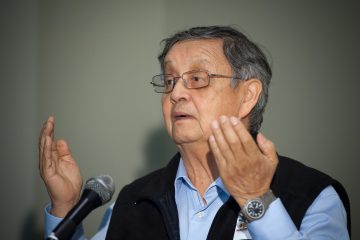 The “Addressing Injustice” symposium included talks by Musqueam Elder Larry Grant on the historical parallels and differences between Aboriginal peoples and Japanese Canadians, and by Dr. Henry Yu on why history still matters to us today. These stories helped me connect what I had just learned about the seventy-six Japanese Canadian students at UBC and my fragmented understandings of the histories of Aboriginal peoples in Canada. I wondered, “If Japanese Canadian students were removed from UBC for internment camps, what was the history like for Aboriginal students at UBC? How does history inform Aboriginal students’ experiences at UBC today?” The timeline project took off with these questions.

At the earliest stages of creating the timeline, my focus was on learning about and documenting the histories of UBC and Canada and their relationships with Aboriginal peoples. However, as the project progressed, I gradually started to think about my own relationship with these histories. Eventually, I came to see myself embedded in the matrix of intertwining historical trajectories of this place that carries the legacy of the Indian Residential Schools, the internment of Japanese Canadians, and so on. I both am affected by and have benefited from the systems of power, oppression, and privilege developed through this complex, and often problematic, history.

Through my work on the timeline, I started to think about the historical contexts of some of my daily experiences of marginalization in Canada as a woman of color whose first language is not English. I began wondering how my experiences today would have been different if colonialism had not established white supremacy in Canada in the first place. At the same time, I realized that I benefit from my affiliation with UBC as a Western educational institution that prioritizes the English language while standing on the unceded territory of the hən̓q̓əmin̓əm̓-speaking Musqueam people. My doctoral degree from UBC puts me in an elevated position to many others in Canada, and more so in Japan. How both English language and Western university degrees have come to attain high currency in the world is not independent from colonial history (Altbach, 2004; Luke, 2006; Mufwene, 2010). Moreover, I came to see that my middle-class socio-economic status enables me to benefit from such historical and ongoing global colonial processes, and that I continue to accrue my privilege while occupying unceded Musqueam territory. Yet, I would not have been able to do so in 1942, when people of Japanese descent were being sent to interment camps. Circumstances have changed since 1942; nonetheless, the white supremacist history of UBC, and more broadly of Canada, still shapes the social landscape of this place (Stanley, 2009), and hence my experiences today.

Thus, I came to see the specific and complex implications that time and place have on my life. My participation in settler colonialism does not negate my struggles as a foreign woman of color in Canada. Privilege is distributed unevenly across settlers and visitors based on their varying and intersecting social positions, such as race, gender, class, migration status, and language (Jafri, 2012). At the same time, my experiences of oppression in Canada do not cancel out my complicity in settler colonialism either, no matter how temporary or permanently I am going to stay in Canada (Lawrence & Dua, 2005). I did not enact colonialism, but I am not innocent as long as I live on this stolen land and benefit from it. I must be accountable for this uncomfortable and yet undeniable fact. In retrospect, I feel that I have created the timeline to learn, and eventually to share with others, that my life, like everyone else’s life, is part of, and not outside, of the histories here in Vancouver and at UBC.

Jafri, B. (2012, March 21). Privilege vs. complicity: People of colour and settler colonialism. Retrieved from http://www.ideas-idees.ca/blog/privilege-vs-complicity-people-colour-and-settler-colonialism

[1] Read the stance that UBC took on the removal of Japanese Canadian students in “Reopening a Sensitive Case” here.