Time and Place at UBC: Our Histories and Relations
» Home » Developer’s Stories » Story 3 – Don’t Aboriginal peoples want equality? What is it that they want then?

Story 3 – Don’t Aboriginal peoples want equality? What is it that they want then?

This story illustrates a “light bulb moment” that I had as I tackled with the question of why Aboriginal communities rejected the 1969 white paper. As part of unpacking debates on the white paper, I explored the myth of multiculturalism located within settler colonialism. 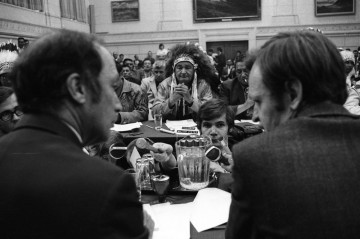 Indian Red Paper Brief to Government, 1970. The Indian Association of Alberta issued a paper, popularly known as the “Red Paper,” as an official Indian response to the 1969 white paper. Photo by Duncan Cameron / Library and Archives Canada / PA-193380.

In the course of documenting events for the timeline, I came to learn about the 1969 white paper proposed by the Canadian government and about Aboriginal communities’ opposition to it. Learning about this turned out to be one of the most puzzling, and eventually most eye-opening, experiences for me in creating the timeline. It challenged my naïve notion of equality as a right that should be given to, and accepted by, everyone. I had to reflect more closely on Aboriginal peoples’ points of view, specifically what it meant for them as the first peoples on this land to be offered the right to be equally included in Canadian society.

In 1969, then Prime Minister Pierre Trudeau and his Minister of Indian Affairs Jean Chrétien created a white paper[1] that proposed the abolition of the Indian Act and the elimination of Indian legal status. These proposals were based on the idea that these changes would promote a kind of equality for all peoples in Canada in parallel with Trudeau’s vision of Canada as a “just society.” According to this logic, the Indian Act was seen as discriminatory because it applied only to Aboriginal people; therefore, removing the policy that established the distinct legal status of “Indian” was proposed as a solution for the legal, social, and economic inequalities facing Aboriginal people in Canada.

My instant reaction to this proposal was positive – “Oh, finally!” However, I soon learned that the white paper – both the process by which it was produced and its content – received significant backlash from Aboriginal communities. The rationale for their rejection was based on the underlying fact that the white paper failed to integrate the concerns raised by the Aboriginal leaders consulted, and that the paper was, in essence, assimilative. As a result of this significant criticism by Aboriginal communities and leaders, the Canadian government withdrew the paper in 1970.[2] 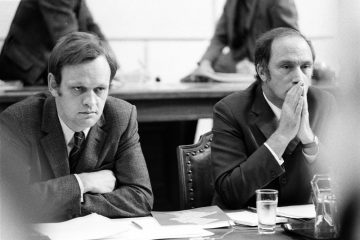 I was puzzled. On the one hand, I understood Aboriginal communities’ frustration over the fact that their input in the consultation process had not been reflected within the proposal; I could also acknowledge and understand their desire both to maintain their distinctive cultural and political identities as Indigenous peoples and to maintain their rights to the land. On the other hand, I thought, like the white paper suggested, that the Indian Act was the source of the problem because it placed Aboriginal peoples as having unequal status to other Canadians. For me, the solution seemed simple – Why not abolish this problematic piece of legislation? Don’t Aboriginal people want equality? What is it that they want?

“Aboriginal peoples are just difficult.” I wondered if there was a grain of truth to this settler narrative. However, I could not settle with this conclusion because I thought that Aboriginal peoples must have had their own good reasons to turn down a government proposal to terminate the Indian Act, an obviously discriminatory piece of legislation. They would not have rejected it just to make things more difficult for settlers. I began to think that I might be failing to see something significant from Aboriginal peoples’ point of view.

I then read “So why don’t we just abolish the Indian Act?” on the Indigenous Foundations website. There, I found the following quote by Harold Cardinal, who headed the Indian Association of Alberta and acted as a vocal opponent to the white paper. I found Cardinal’s words to be particularly helpful to understand Aboriginal peoples’ opposition to the white paper from their standpoint:

We do not want the Indian Act retained because it is a good piece of legislation. It isn’t. It is discriminatory from start to finish. But it is a lever in our hands and an embarrassment to the government, as it should be. No just society and no society with even pretensions to being just can long tolerate such a piece of legislation, but we would rather continue to live in bondage under the inequitable Indian Act than surrender our sacred rights. Any time the government wants to honour its obligations to us we are more than happy to help devise new Indian legislation.

Two things about this quote stood out to me. First, Cardinal’s words helped me understand the double-sided nature of the Indian Act. Aboriginal peoples rejected the white paper not because they were completely in favor of the Indian Act but because, for them, giving up the Indian Act meant surrendering any existing legislative claims to special Aboriginal rights; there were no other policy documents but the Indian Act that ensured such rights for them.

I slowly began to realize that I was blinded by what Simpson, James, and Mack (2011) call the “myth of multiculturalism,” which according to them, “claims that racial equity and harmony exist in Canada, and that Canada consistently supports a high quality of life for everyone, be one white or settler, Indigenous, or a ‘visible minority’” (p. 287). My central question, “Don’t Aboriginal peoples want to be equal to other Canadians?” stems from this myth. I had been aware of critiques arguing that Canadian multiculturalism emphasizes cultural aspects of diversity while consequently masking the uneven distribution of power across different social groups (Bannerji, 2000). I was even aware of the complicity of settlers and visitors in colonization of Aboriginal peoples’ land, irrespective of their experiences of racism and other forms of oppression (Lawrence & Dua, 2005). But I still found myself uncritically and unconsciously supposing that everyone, whether Aboriginal, or racialized, or other, should be positioned as “equal” in the same ways Prime Minister Pierre Trudeau had envisioned equality in his “just society” for Canada.

Case in point: The Canadian government issued the white paper while Indian Residential Schools were still in operation. The last federally-run residential school, the Gordon Indian Residential School in Punnichy, Saskatchewan, was open until 1996. Moreover, the government did not officially apologize for its role in the Indian Residential School system until 2008. Furthermore, colonization of the land is continuing. For example, to date, 95% of British Columbia is on unceded First Nations land that “First Nations people did not give it up or legally sign it away to Britain or Canada” (The City of Vancouver, 2014, p. 14). What Cardinal referred as the Canadian government’s “obligation” to Aboriginal communities is not merely an ideological claim, and must be contextualized in these material realities of settler colonialism.

As I grappled with Canadian legal histories by contextualizing them in the relationship between the Canadian government and Aboriginal communities, I was reminded of how much the myth of multiculturalism blinded me from seeing the absurdity of ongoing settler colonialism in Canada. When I really think about it, it is strange that the Canadian settler state “offered” Aboriginal peoples – the first peoples on this land – the right to be “equally included” in Canada while continuing to occupy Aboriginal lands. Equally strange, in retrospect, is that I didn’t understand why Aboriginal peoples thought that the white paper was assimilative. Whose land are we on? What has the history of the relationship between Aboriginal and non-Aboriginal communities been on this land? From whose standpoint do we think and speak? When I initially approached these questions, my way of thinking was very much colored by settler narratives that neglect Aboriginal peoples’ perspectives. The process of grappling with my confusions around the 1969 white paper taught me how crucial it is to understand issues like this from Aboriginal peoples’ points of view. It also reminded me of the joy, as well as of the importance, of questioning my views and opening myself up to multiple, and often conflicting, voices. Although it can be extra work, it eventually gives me more informed and complex ways of understanding the world and myself in it.

Bannerji, H. (2000). The dark side of the nation: Essays on multiculturalism, nationalism and gender. Toronto, Canada: Canadian Scholars’ Press.

The City of Vancouver. (2014). First Peoples: A guide for newcomers. Retrieved from http://vancouver.ca/files/cov/first-peoples-a-guide-for-newcomers.pdf

[1] In general, a white paper refers to an authoritative report that the government issues to argue a specific position or to propose a solution to a problem to the audience outside the government (e.g., the general public). The 1969 white paper (Statement of the Government of Canada on Indian policy) can be accessed here.

[2] Read more about the white paper and Aboriginal communities’ response to it here.

Tsukada, H. (2016, May 2). Don’t Aboriginal peoples want equality? What is it that they want then? Retrieved from https://timeandplace.ubc.ca/developers-stories/story-3-dont-aboriginal-peoples-want-equality-what-is-it-that-they-want-then/